Department of Personnel & Training released the office memorandum dated 13th July 2020, as per the O.M.

(i) Wherever the working hours have been arrived at after taking into account the night weightage factor, no further compensation may be admissible.

(ii) Night Duty will be defined as duty performed between 22:00 hours and 6:00 hours

(iii) A uniform weightage of 10 minutes shall be given for every hour of night duty performed.

(iv) The ceiling of basic pay for entitlement of Night Duty Allowance shall be Rs. 43600/- per month.

(vi) This formulation will extend to all employees across all Ministries/ Departments who were already in receipt of NDA.

(vi) The amount of NDA will be worked out separately for each employee depending upon the basic pay the concerned employee is drawing on the date of performing the night duty. The existing practice for giving same rate of NDA to all employees with a particular Grade Pay should be discontinued.

(vii) A certificate should be given by the supervisor concerned that Night Duty is essential.

Railway Board released the order RBE No. 36/2018 dated 8th March 2018 to implement the Night Allowance for Railway Employees with effect from 1st July 2017.

As per the Order

Consequent upon the decision taken by the Government of India on the recommendations of the 7th CPC, the President is pleased to decide that the hourly rate of NDA shall be equal to {(Basic Pay+Dearness Allowance)/200) which would be admissible to eligible categories of non-gazetted Railway Servants classified under chapter XIV of the Railway Act, 1989 read with the Railway Servants (Hours of Work and Period of Rest) Rules, 2005 for work put in during the period from 2200 hrs to 0600 hrs. The rate should be worked out separately for each employee. The present formulation of weightage of 10 minutes for every hour of duty performed between the hours of 22:00 and 06:00 would continue.

The grant of NDA shall be subject to furnishing of a certificate by the supervisor concerned that Night Duty is essential.

The revised rates of NDA shall be admissible with effect from the 1st of July, 2017.

These orders would be subject to modification, if any, after the issue of instructions by the Nodal Ministry i.e. Ministry of Personnel, Public Grievances and Pensions (Department of Personnel & Training).

How to Calculate Night Duty Allowance

The approved formula to calculate NDA is

Check here how to calculate NDA in detail 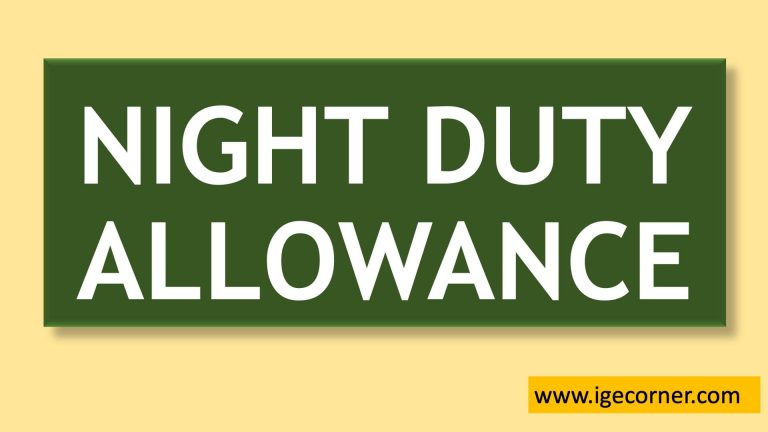 Night Duty Allowance Calculation Night Duty allowance will be calculated as per following method, the following 4 values required to calculate NDA 1. Weightage Hours Weightage of 10 minutes for every hour of duty performed between 22:00 Hrs and 06:00 Hrs will be taken for calculation of payment of NDA, which means In the Night… Compliance of Covid protocols while obtaining Life Certificates from Pensioners –...

Pensioners can submit Annual Life Certificate manually or digitally as per...

Grant of Paid Holiday to employees on the day of poll...