Cabinet approved the release of additional 1% Dearness Allowance to Central Government employees and Dearness Relief to pensioners from July 1 2017. Revised DA will be applicable from July 1, 2017. After the announcement now DA percentage will be 5% for CG employees.

Now Transport allowance also increase based on the 5% Dearness Allowance.

The 7th Pay Commission recommendations on Transport Allowance was implemented by the Union Cabinet with no changes.

Government implemented the 7th Pay Commission Transport Allowance and released the Office Memorandum No.21/5/2017-E.II (B) dated 7th July 2017, in addition to this OM, FinMin also released another Office Memorondum on 2nd August, 2017 O.M No.21/5/2017-E.II(B) with partial modification on Transport Allowance to CG Employees for pay of Rs.24200/- & above in Pay Level 1 & 2

Here is the Transport Allowance Ready Reckoner from July 2017 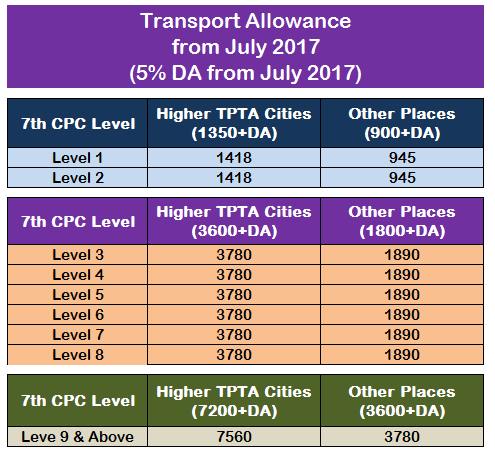 One time relaxation of the condition regarding exercising of option for admissibility of official car or in lieu of that Transport Allowance at higher...