Transport Allowance calculated based on the current DA, considering current DA rate i.e. 21% from Jan 2020 following TA Rates will be applicable from Jan 2020 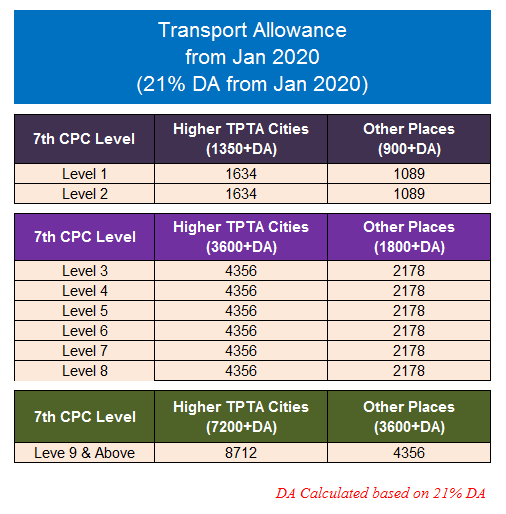 After the 7th CPC Recommendation for Transport Allowance, FINMIN accepted the recommended allowance and released the Office Memorandum on No.21/5/2017-E.II (B) dated 7th July 2017 with the subject Implementation of the recommendations of the 7th Central Pay Commission relating to grant of Transport Allowance to Central Government employees.  [ Click here to view the FINMIN order].

(a) During Leave: The allowance will not be admissible for the calendar month(s) wholly covered by leave.

(d) During training treated as duty: The allowance may be granted during such training, if no Transport Facility/ Traveling Allowance /Daily Allowance is provided for attending the training institute. During Official tour in him training course, the allowance will not be admissible when the period of the tour covers the whole calendar month. Also, during training abroad, no Transport will be admissible when the period of such training covers the whole calendar month.

(e) During inspections /survey duty by Members of Special Parties within the city but exceeding 8 kms. From the Headquarters or during continuous field duty either in or outside the Headquarters: Transport Allowance is given to compensate for the expenditure incurred for commuting for both to and fro between the place of duty and residence. In case when one gets Road Mileage/Daily Allowance or free transportation for field/inspections /survey duty or tour for a period covering the whole calendar month, he/she will not be entitled to Transport Allowance during that calendar month.

(f) To vacation staff: Vacation staff is entitled to Transport Allowance provided no free transport facility is given to such staff. However, the allowance shall not be admissible when such vacation spell, including all kinds of Leave, cover the whole calendar month(s).

Holiday to be observed in Central Government Offices during the 2022...

Denial by the CGHS empanelled hospitals for treatment – Confederation writes...

Safeguarding the interests of the employees of Ordnance Factory Board (OFB)...