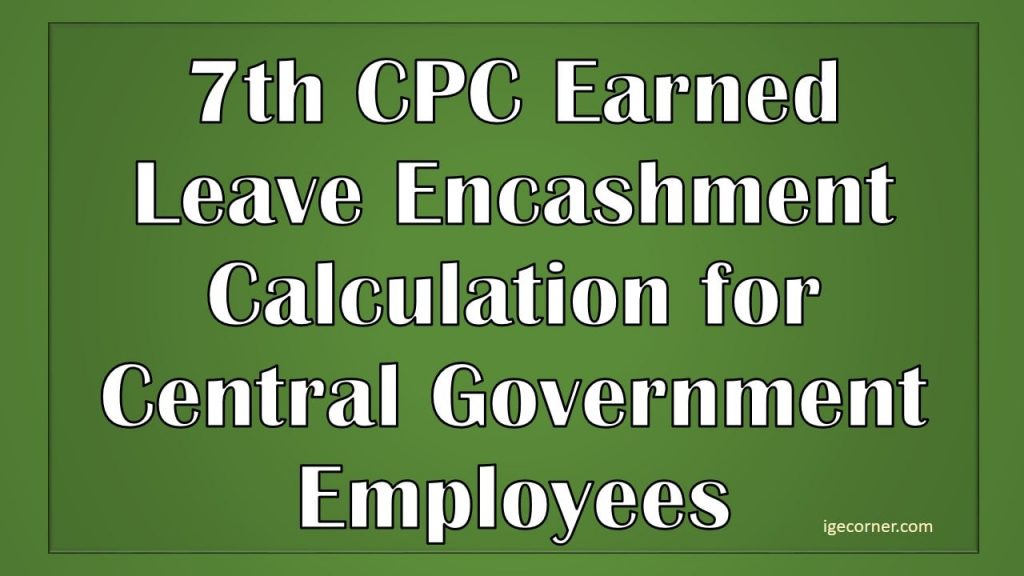 Presently 30 days EL per annum is granted to Civilian employees and 60 days to Defence personnel. EL can be accumulated up to 300 days in addition to the number of days for which encashment has been allowed along with LTC. Suggestions have been made to increase the accumulation to 450 days, allow encashment of 50 percent of the accumulated EL after 20 years of service and delink encashment of leave from LTC. A novel concept of “gifting” has been put forward, wherein employee should be allowed to ‘gift’ certain number of days of leave to one’s spouse or one’s colleague. “Vacational” staff like teachers, principals, etc. have demanded restoration of 10 days EL, which was changed to 20 days Half Pay Leave by VI CPC.

In many organizations, employees are encouraged to take leave on the premise that it revitalizes them and is beneficial for the organization in the long run. Such a system is not prevalent in the government sector in India, but substituting leave with cash is also not desirable. Hence, no change in encashment guidelines is recommended.

The Commission recognizes that Earned Leave is, as the name suggests, earned by an employee through the services rendered. Hence, it is personal to the employee and the concept of “gifting” cannot be considered.

Enhancement of ceiling of Earned Leave for purposes of Leave Encashment

The Commission has received representations seeking raising the ceiling limit of 300 days to 450 days for purposes of Leave encashment.

The Commission notes that based on the recommendations of the VI CPC, serving employees are entitled for encashment of Earned Leave up to 60 days while in service. This is not to be deducted from the maximum number of Earned Leave of 300 days encashable at the time of retirement. The VI CPC, therefore, has further liberalised the regime of leave encashment.

The recommendations in relation to pay of both the civilian and defence forces personnel will also lead to a significant increase in the pay drawn and therefore in the total amount of leave encashment available for an employee. Therefore raising the present ceiling of 300 days is not recommended by the Commission.

How to Calculate Leave Encashment

As per the rule, Eligible employees can encash a total of 300 days Earned Leave, n case earned leave less than 300 days, then the remaining leaves can be taken from HPL, in total 300 days allowaed for leave encashment at the time of retirement.

Yes. A Govt. servant can be permitted to encash earned leave upto 10 days either at the time of availing LTC for himself or when his family avails it provided other conditions are satisfied.

The industrial employees, other than those under the cadre control of the Ministry of Railways, are entitled to encash both Earned Leave and Half Pay Leave, subject to overall limit of 300. The cash equivalent of Half Pay Leave shall be equal to leave salary admissible for Half Pay Leave plus Dearness Allowance admissible on the leave salary without any reduction being made on account of pension and pension equivalent of other retirement benefits payable. But no commutation of Half Pay Leave shall be allowed to make up for the shortfall in Earned Leave and these orders are effective from 07-11-200640M No. 12012/3/2009- Estt.(L) dated 28-12-2012)