Cabinet approved the release of additional 2% Dearness Allowance to Central Government employees and Dearness Relief to pensioners from July 1 2018. Revised DA will be applicable from July 1, 2018. After the announcement,  DA percentage will be 9% for CG employees. Transport Allowance will also change based on the latest Dearness Allowance percent.

Government implemented the 7th Pay Commission Transport Allowance and released the Office Memorandum No.21/5/2017-E.II (B) dated 7th July 2017, in addition to this OM, FinMin also released another Office Memorondum on 2nd August, 2017 O.M No.21/5/2017-E.II(B) with partial modification on Transport Allowance to CG Employees for pay of Rs.24200/- & above in Pay Level 1 & 2 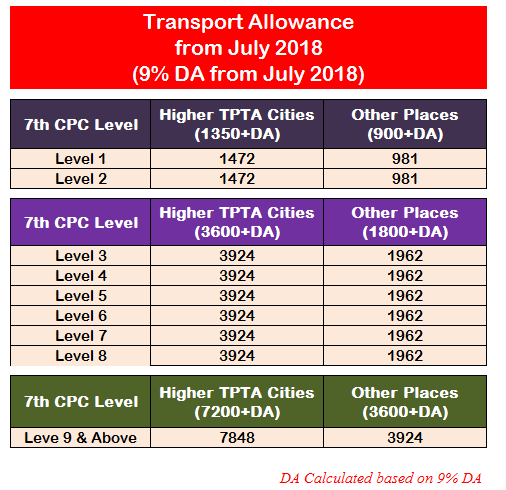