The Central Government has released the AICPIN of June 2019 which showed an increase to 316, the much awaited AICPIN value has finally released, based on the DA Calculation the DA as on June 2019 is 17.09%, which means five per cent increase in DA is confirmed now. 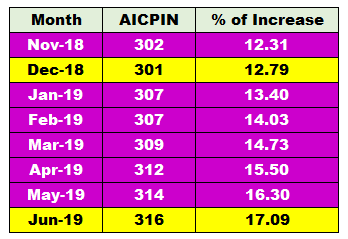 The DA percent of employees will increase by 5% from the existing 12% and total DA is 17% from July 2019, which will then be the highest DA increment so far since the implementation of 7th pay commission in 2016. Central Government will revise the DA twice in a year, on 1st January and 1st July. DA is a fully taxable allowance.

DA / DR Rate as applicable after implementation of 7th Pay Commission recommendations from 1.1.2016 is shown in table below :-

How to calculate Dearness Allowance

Formula to calculate Dearness Allowance for Central Government Employees after 1.1.2016