Dearness Relief in the 5th CPC series from 01.07.2021 to CPF beneficiaries

Time limit for submission of Travelling Allowance and other claims by staff, RBE 229/202

All India Consumer Price Index Numbers for Industrial Workers – CPI(IW) for December 2018 decreased by 1 point and pegged at 301, based on the DA Calculation formula the DA as on December 2018 is 12.79%. 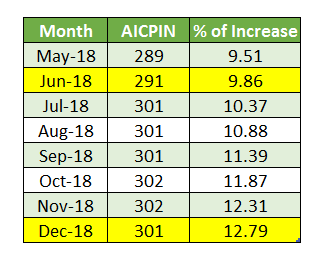 As per the Index value 3 percent DA hike is confirmed, however we have to wait for the confirmation from the government.

Time limit for submission of Travelling Allowance and other claims by...